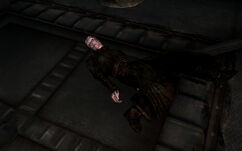 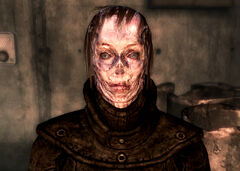 “I had a friend with me when those mutant bastards came out of nowheres. She panicked and ran the wrong direction - further into the basement.”— Harland

Harland asks the Courier to find one of his friends of whom he was separated from during the attack at the REPCONN test site. His friend is, unfortunately, the dead ghoul prisoner who can be found in the jail section of the basement.

The body is still present if the Courier is not following Harland's request.

The ghoul prisoner appears only in Fallout: New Vegas.

Retrieved from "https://fallout.fandom.com/wiki/Ghoul_prisoner_(Fallout:_New_Vegas)?oldid=3191539"
Community content is available under CC-BY-SA unless otherwise noted.