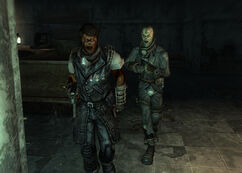 Ghoul guards are mercenaries hired by Griffon to guard the Museum Authority Building in 2277.

Ghoul guards are non-feral, Underworld inhabitants pressed into service by Griffon, an entrepreneur working in the rotunda inside the Museum of History. They were lured with the promise of ailment cures thanks to Griffon's fabled "Aqua Cura." Griffon then set about weeding the punga from the plant, and reveals the true "essence" of Aqua Cura itself: that liquid is nothing more than dirty water, rebottled in Aqua Pura containers. Not only are the guards sworn to secrecy, but they are paid for their services and shut mouths.

Guard responsibilities include off-loading shipments of Aqua Pura that Griffon has "obtained," siphoning the pure water into bathtubs so it can be sold to raiders, mercenaries, Outcasts, and other factions not part of the Brotherhood's survival plan, and rebottling Aqua Cura to keep Griffon in supplies. Griffon is even flexible enough to allow his guards to take as many Aqua Cura as they need, knowing full well that a sales patter is important to shift this dubious commodity.[1]

They are guarding the building from people looking to learn the secret of Aqua Cura. It is also explained in the note "Griffon's bottling instructions," that they are the ones who pick up the Aqua Pura deliveries from the Brotherhood of Steel and switch it with ordinary irradiated water to be sold as Aqua Cura.

* Only one guard will have a wig

Ghoul guards appear only in the Fallout 3 add-on Broken Steel.

Retrieved from "https://fallout.fandom.com/wiki/Ghoul_guard?oldid=3342653"
Community content is available under CC-BY-SA unless otherwise noted.