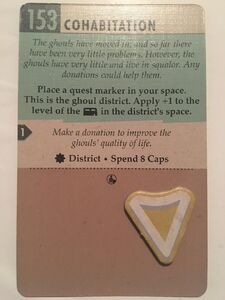 The Ghoul District is a dynamic location in Fallout: The Board Game.

The Ghoul District is made from a collection of ghouls who have been homeless and/or mistreated by other races in the waste. When they had nowhere to go, they contacted the player to help sort out their problem.

Ghoul District is an extension to either The Tower or Pendleton Estate dependent on the outcome of Can't We All Just Get Along? The Ghoul District increases the level of the settlement it is in by 1 to represent the increase in population.

Ghoul District will only appear in the game after completing the quest Can't We All Just Get Along?.

Sepulcher and Ghoul District are the same location, except one occupies a settlement while the other occupies a ruins.

The Ghoul District is in reference to Roy Phillips and his ghouls in Fallout 3.

Retrieved from "https://fallout.fandom.com/wiki/Ghoul_District?oldid=2893765"
Community content is available under CC-BY-SA unless otherwise noted.