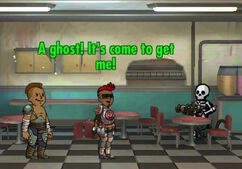 “Raiders are so superstitious. Let's give them something to be scared of.”

Ghostly Gag is a limited time overseer quest in Fallout Shelter, available during the fall season.

This quest takes place in a vault. Only 1 dweller can be taken on this quest. Enemies are exclusively raiders in groups of one to three. The raider boss is accompanied by one more raider. Though the objective is to kill the raider boss, a fight can be avoided if "Boo!" is selected among the dialogue options when speaking to her. Whether the raider boss is killed or not, she will yield a skeleton costume and at least a rare or legendary quality junk.

The "Boo!" dialogue option is the only one that allows you to complete the quest without fighting the raider boss.

Some of the quotes throughout the quest like "I ain't afraid of no ghost." are famous quotes taken from the 1984 blockbuster comedy film Ghostbusters. 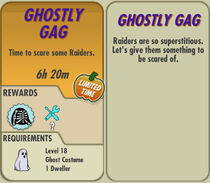 Rewards
Add an image to this gallery

Retrieved from "https://fallout.fandom.com/wiki/Ghostly_Gag?oldid=3100050"
Community content is available under CC-BY-SA unless otherwise noted.