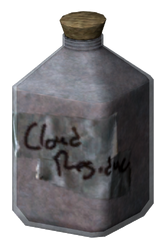 Ghost Sight is a consumable in the Fallout: New Vegas add-on Dead Money.

Ghost Sight provides a green night vision effect. The effect is similar to that of Cateye or Nuka-Cola Quartz, and is useful in low-light areas and for avoiding the sight distortions of the Cloud.

Retrieved from "https://fallout.fandom.com/wiki/Ghost_Sight?oldid=3423979"
Community content is available under CC-BY-SA unless otherwise noted.