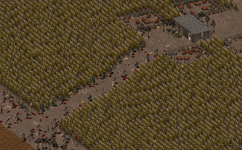 The Ghost Farm, a gruesome scenery

Something strange is happening at the farm northeast of Modoc. Investigate and report back to Jo
Jo is suspicious of the Slags. Find out about the dead bodies at the Ghost Farm and find out what happened to Karl
Deliver Slag message to Jo in Modoc
Jonny's in the Slag caves. Find a way to get Jonny back home to Balthas 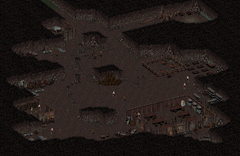 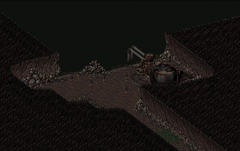 Northern section of the caves, where Jonny and the Slag children are located

Play sound
City of Lost Angels.ogg
“I was a peaceful farmer that worked the fields as hard as any man -- until they started showing up at night. All glowing, with pasty white skins... Spooked the hell out of me, it did. Night after night they showed up and stole crops and cattle alike; I could do nothing to stop them.”— Karl

The Ghost Farm is a small farm on the outskirts of Modoc, created by the Slags just above their main underground settlement.

The Slags are the descendants of a group of secret militia officers who sealed themselves underground and slowly mutated. Few can bear to be on the surface or stand the bright light of the sun. The Slag population steadily increased since the Sealing. It soon became apparent that they could no longer survive underground without further supplies. So the Seal was broken, and they once again looked to the surface for survival, creating a small farm some years prior to 2241, which to the people of Modoc looked as if the farm appeared out of nowhere.

A group of Modoc's inhabitants were out hunting when they noticed the new farm. Soon after, some of them got together to visit their new neighbor, but nobody was found there. After many months of trying to contact the owners with no success, it was decided that the farm must have been abandoned soon after it was built. So instead of letting the crops rot in the fields, young Karl moved in.

To get rid of the intruder, the Slags, who were not violent people by nature, came up with the ghost idea, smearing themselves with glowing fungus. After some time, Karl started to tell stories of seeing strange glowing figures tending the crops and feeding the animals at night. The other people of Modoc all laughed at him, thinking he was making up stories. Then one day Karl stopped coming into town.

When the people of Modoc came looking for him, they found bodies, some crucified, while others were left to rot out in the sun. In reality, the bodies were mere props the Slags manufactured to scare off those who try to steal from them, mostly brahmin guts and dummies. While the inhabitants of Modoc believed Karl to be dead, he only escaped to the Den.

Unfortunately, this has been a little too effective. Around 2241, the Slags were seeking to make contact with the surfacers, but no one came to the farm anymore for fear of the ghosts.

Upon entering the Ghost Farm, numerous stakes with corpses on them can be seen. Good Perception makes it easy to notice that the bodies are no more than dummies, covered in brahmin innards. A secret entrance to the underground area is located on the west side of the cornfield, but it cannot be used before talking to the Slags.

The shack in the middle of the cornfield holds three empty footlockers and a rope. Walking over the rug on the floor will send the hapless person falling down to the underground level. The fall is damaging and may even cripple a limb, so saving is advisable before the fall, unless one's Doctor skill is up for the task. This is one way to access the underground area and talk to the Slags for the first time, the other is to wait until midnight and surrender when talking to a patrol outside.

The main underground area consists of a single large chamber, with a large room at the bottom part of the map.

North of the main chamber is the underground lake area. The area holds multiple children, including Jonny. A water pump is also present, though it cannot be interacted with.

The background music is City of Lost Angels, which was originally used for the Boneyard in Fallout.

The Ghost Farm and the Slags appear only in Fallout 2. It is unknown whether the Chosen One helped establish good relations between Modoc and the Slags, the people of Modoc continued to consider the place haunted or simply wiped out the Slags in what they considered revenge for Karl's death.

Guns and Bullets
Add a photo to this gallery
Retrieved from "https://fallout.fandom.com/wiki/Ghost_Farm?oldid=3470572"
Community content is available under CC-BY-SA unless otherwise noted.