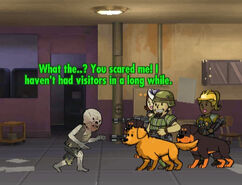 “Strange radio signals have been emitting from Vault 93. Sounds like old sports broadcasts from before the bombs dropped. Go check it out!”

Strange radio signals are being picked up from Vault 93. Perceptive dwellers (5+ Perception) will notice they appear to be old sports broadcasts and can be sent out to investigate the source.

The dwellers will reach Vault 93 and face nothing but feral ghouls including glowing ones on this quest. Eventually they will come across one civilized ghoul claiming to have played for the Rockville Ravens before the Great War. Acknowledging, or humoring, that fact, will prompt him to give the dwellers a reward. 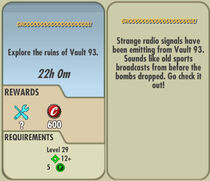 Rewards
Add an image to this gallery
Retrieved from "https://fallout.fandom.com/wiki/Ghooooooooooooooooooul!?oldid=3274293"
Community content is available under CC-BY-SA unless otherwise noted.