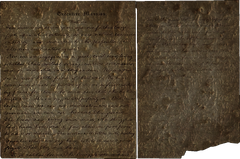 GECK render of the Gettysburg Address in the Capitol Preservation Society

“Lincoln's most inspirational speech! What a marvelous find.

The Gettysburg Address is an item that was cut from the final version of Fallout 3. It was a speech by U.S. President Abraham Lincoln and one of the most quoted speeches in United States history. It was delivered at the dedication of the Soldiers' National Cemetery in Gettysburg, Pennsylvania, on the afternoon of Thursday, November 19, 1863, during the American Civil War, four and a half months after the Union armies defeated those of the Confederacy at the decisive Battle of Gettysburg.

Originally, it could have been found by the Lone Wanderer from an unknown location and sold to Leroy Walker for 50 caps or to Hannibal Hamlin for 75 caps.[1]

Abraham Lincoln's carefully crafted address, secondary to other presentations that day, came to be regarded as one of the greatest speeches in American history. In just over two minutes, Lincoln invoked the principles of human equality espoused by the Declaration of Independence and redefined the Civil War as a struggle not merely for the Union, but as a "new birth of freedom" that would bring true equality to all of its citizens, and that would also create a unified nation in which states' rights were no longer dominant.

Beginning with the now-iconic phrase "Four score and seven years ago..." Lincoln referred to the events of the Civil War and described the ceremony at Gettysburg as an opportunity not only to consecrate the grounds of a cemetery but also to dedicate the living to the struggle to ensure that "government of the people, by the people, for the people, shall not perish from the earth."

The only confirmed photo of Abraham Lincoln at Gettysburg (seated), taken about noon, just after Lincoln arrived and some three hours before he spoke. To Lincoln's right is his bodyguard, Ward Hill Lamon. Despite the speech's prominent place in the history and popular culture of the United States, the exact wording of the speech is disputed. The five known manuscripts of the Gettysburg Address differ in a number of details and also differ from contemporary newspaper reprints of the speech.

Fourscore and seven years ago our fathers brought forth on this continent a new nation, conceived in liberty, and dedicated to the proposition that all men are created equal.

Now we are engaged in a great civil war, testing whether that nation, or any nation, so conceived and so dedicated, can long endure. We are met on a great battle-field of that war. We have come to dedicate a portion of that field, as a final resting place for those who here gave their lives that that nation might live. It is altogether fitting and proper that we should do this.

But, in a larger sense, we can not dedicate, we can not consecrate, we can not hallow this ground. The brave men, living and dead, who struggled here, have consecrated it, far above our poor power to add or detract. The world will little note, nor long remember what we say here, but it can never forget what they did here. It is for us the living, rather, to be dedicated here to the unfinished work which they who fought here have thus far so nobly advanced. It is rather for us to be here dedicated to the great task remaining before us -- that from these honored dead we take increased devotion to that cause for which they gave the last full measure of devotion -- that we here highly resolve that these dead shall not have died in vain -— that this nation, under God, shall have a new birth of freedom—and that government of the people, by the people, for the people, shall not perish from the earth.

The Gettysburg Address appears only in Fallout 3.

Document in the right low corner 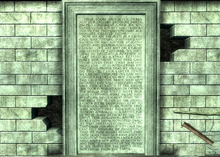 Retrieved from "https://fallout.fandom.com/wiki/Gettysburg_Address?oldid=3447579"
Community content is available under CC-BY-SA unless otherwise noted.