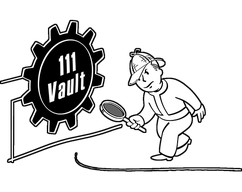 “That confirms it. This isn't a random kidnapping. Whoever took your kid had an agenda. Hmm... There's a lot of groups in the Commonwealth that take people. Raiders, super mutants, the Gunners, and of course, there's the Institute.”— Nick Valentine

Getting a Clue is a main story quest in Fallout 4.

At Valentine Detective Agency, Nick Valentine will question the Sole Survivor about their missing son. The conversation eventually leads to Nick suspecting a certain notorious mercenary named Conrad Kellogg as the kidnapper. Kellogg was recently seen living in Diamond City with a young boy, but has since disappeared. To confirm his suspicions and search for clues, Nick suggests investigating Kellogg's house. The door is locked with a Master lock, but the door can either be picked by the player character (if they have unlocked the third rank of the Lockpick perk) or a companion such as Cait or an Automatron with a lockpick module installed). Alternatively, the door can be unlocked with a copy of Kellogg's house key.

There are six ways to obtain a copy of the key:

Once inside, pressing the button underneath the desk reveals Kellogg's secret room behind a wall, which Nick suggests searching for clues. After the Sole Survivor picks up the San Francisco Sunlights, the duo decides to use Dogmeat to track Kellogg's scent from the cigar. Nick becomes available as a companion and offers to accompany the Sole Survivor on this mission. Interacting with Dogmeat to give him the scent completes this quest and starts Reunions.

Although X6-88 has one listed reaction, it is impossible to have met him at this stage in the story. Likewise, Paladin Danse is not available as a companion at this point.

Retrieved from "https://fallout.fandom.com/wiki/Getting_a_Clue?oldid=3450171"
Community content is available under CC-BY-SA unless otherwise noted.