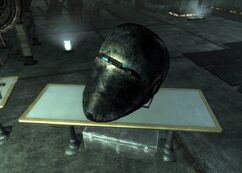 Getting Ready for Prime Time is an unmarked and repeatable quest in the Fallout 3 add-on Broken Steel.

The quest is started by asking Scribe Rothchild how to further help the Brotherhood of Steel. He requests that the player character bring him sensor modules and old cameras to help repair Liberty Prime.

Once the quest Who Dares Wins is completed, the player character can accept the quest by talking to Scribe Rothchild in the Citadel Laboratory. The Lone Wanderer is asked to find some cameras and sensor modules. These items can be found in most toolboxes and near workbenches. Once at least one is obtained, or as many as the carry weight allows (for efficiency's sake), one can return to Rothchild for a reward of 100 caps and 25 XP for every camera. For every sensor module turned in, the player character receives 75 caps and 10 XP. These are not awarded until after exiting dialogue with Rothchild.

No matter how many cameras or sensor modules are turned in, Liberty Prime will never be repaired in-game.

The phrase "prime time" was first coined in the 1950s, typically it refers to the point at which an audience is at its greatest. In this situation it takes on a double meaning; the build-up to Liberty Prime's return (which occurs in Fallout 4), as well as an indirect reference to Liberty Prime itself.

Retrieved from "https://fallout.fandom.com/wiki/Getting_Ready_for_Prime_Time?oldid=3229857"
Community content is available under CC-BY-SA unless otherwise noted.