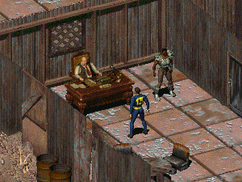 The bug and tape recorder

“I don't know who you are, but I don't take kindly to strangers walking into my office and accusing me of things they know nothing about.”— Gizmo

Get Gizmo's confession is a side quest in Fallout.

After the Vault Dweller speaks to Killian Darkwater for the first time, Kenji will enter the store wielding a hunting rifle saying "Gizmo sends his regards!" and then attack Killian. Kill the assassin to earn 400 XP plus the regular XP for killing him.

Alternatively, talk to Gizmo and accept the Kill Killian quest. Instead of going through with it, talk to Killian, and mention it when asking about Gizmo. The quest should continue as normal; this may be the only option if the player character did not assist by attacking the assassin.

The player character should proceed to Gizmo's Casino. At this point they can:

Regardless of the option chosen, the Vault Dweller must return to Killian to get their reward. The method used does not alter the reward.

Retrieved from "https://fallout.fandom.com/wiki/Get_Gizmo%27s_confession?oldid=3345582"
Community content is available under CC-BY-SA unless otherwise noted.