The Germantown police HQ is a former police headquarters that is now under the control of super mutants in 2277. It is used as a base of operations from which they raid locales such as Big Town, and further use it as a holding place/processing location for their captured prey.

The Germantown police HQ was housed in the local police department of Germantown in the state of Maryland. There are also a few terminals detailing the final 911 calls before the Great War, which include: a fire, a breaking and entering in which the burglar takes the phone from the caller (a woman) and informs the call center that his wife forgot to take her pills, and a man who tells strange stories about his shoes growing wings and other strange happenings.

The day before the Great War, the National Catastrophe Relief Auxiliary - Response Unit MD-478 set up an evacuation center adjacent to the police headquarters in case of a major catastrophe, which was rumored to be an imminent attack by the Chinese. A National Guard unit later arrived to maintain order and assist the NCRA unit. After the bombs fell, the evacuation center and police HQ were used for the treatment of patients affected by radiation sickness from the nuclear bombs, which had just been dropped en masse on Washington, D.C. and the surrounding area. This is mentioned in several log entries made by the Presiding Officer of National Catastrophe Relief Auxiliary - Response Unit MD-478.

The outside area consists of a pre-War camp, where people had sought refuge within during the Great War. At night, there are super mutants, but during the day, it is rare to face any super mutants except during the quest Big Trouble in Big Town. In the tents are beds which can be used and some super mutant gore bags that may contain bottle caps. There is also a Very Hard locked door that leads to the ground level.

As the Lone Wanderer enters the jail, there is an impound terminal, as well as a mine and two super mutants to the hall on the left next to the fire hydrant. Be mindful of the rigged shotgun in the room (requires Repair 45 to disable). There is also a first aid box in the back right that leads out into the hall. At the end of the hall, there is a room with a pool table featuring mutilated dead bodies and gore bags.

Further down the hall, there is a door leading to the first floor, with a frag mine near the bottom of the stairs. After passing the mine, there may be more super mutants out in the hall. There is a room to the right, and another hallway to the left. In the room to the right, there is a mine in the middle, some 911 terminals that contain recorded pre-War 911 calls only. Moving to the end of the room, a door to the hall can be found, in which the first room to the right should contain tables. There will be ammunition in the desk covered by dirt, other than that it will just be ruined books. Exiting the room and going to the right, will lead down to the hall mentioned earlier. There will be a room with a super mutant waiting; which holds the Germantown jailer's key.

Down here, one may find Red in the room with the cell doors, directly beside the lockdown computer. This terminal requires either a Science skill of 100, or the password from lockdown computer holotape. There is a door leading outside at the end of the hall.

In the room across the hall from where Red is found in her cell, a Very Hard locked police station terminal can be found, as well as a door across from it. A Science skill of 100 or Lockpick skill of 75 or higher is required to gain access. Beyond the door are three first aid boxes, several weapons, assorted ammunition, grenades, and chems, along with three cherry bombs.

Go to a hall with another fire hydrant, and there will be a closet with two gore bags and stairs leading to the basement. The first room on the left does not have much, but the second has an Average lock which leads to a room that has some ammunition and a 10mm submachine gun, as well as a Fat Man. There will be a room with gore bags hanging from the ceiling, and in the back is a first aid box, a gun case, and a doorway leading to a room with a radroach and shelves. Voices can be heard coming from the kitchen, and through the room with shelves, it is possible to travel to a hall, where to the right will be a super mutant, as well as a radroach. The refrigerators have a good amount of food, and Shorty will be seen tied up in the middle of the room.

"And that's how you get to llama school," a quote stated in one of the 911 calls, is a reference to a song from the MTV sock-puppet talk show The Sifl and Olly Show. 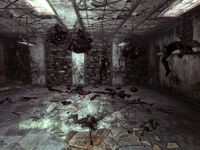 The super mutants' 'meat locker' down at the basement