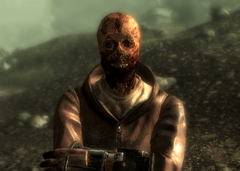 Gerard as a ghoul

“Ah, I can see the glint of Atom's Light in your eyes!”

Brother Gerard is the gatekeeper for the Holy Light Monastery in 2277.

Officially the first officer of the Apostles of the Eternal Light, an evangelical off-shoot of the Church of the Children of Atom, Gerard is direct and friendly to a point, but is willing to do anything to further the causes of his religion.[1] He acts as the gatekeeper to the Holy Light Monastery in Springvale, and gives out holy water (which is in truth, irradiated Aqua Pura) to travelers passing by.

Brother Gerard appears only in the Fallout 3 add-on Broken Steel.