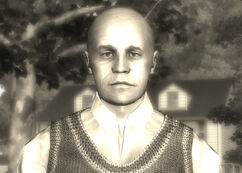 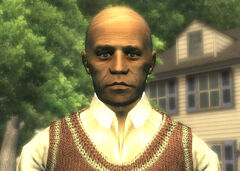 “Another perfect Saturday afternoon. Make sure you enjoy it, sport!”

George Neusbaum is one of the inhabitants of Vault 112 and part of the Tranquility Lane virtual reality simulation, still alive in 2277.

Married to Pat and the father of Timmy, George is becoming increasingly concerned that his kid isn't "tough" enough. If he can't survive a 10-year-old female bully named Betty, what's Timmy going to be like in the real world? Perhaps the military can teach him a thing or two; it didn't do George any harm.[1] Like the other inhabitants of Vault 112, he is trapped in the Tranquility Lane simulation by Stanislaus Braun.

He is the husband of Pat and the father of Timmy.

George Neusbaum appears only in Fallout 3.

George in the cut photograph

Retrieved from "https://fallout.fandom.com/wiki/George_Neusbaum?oldid=3285088"
Community content is available under CC-BY-SA unless otherwise noted.