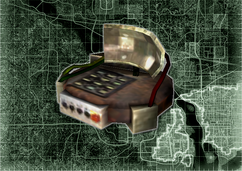 “For every map marker you uncover in the Capital Wasteland, I'll pay you a fair sum in bottlecaps.”— Reilly

Geomapping with Reilly refers to an unmarked and repeatable quest in Fallout 3.

After completing the quest Reilly's Rangers and offering Reilly your help with their mapping service, she will give you a geomapper module. As long as you have the module in your inventory Reilly will pay you 30 caps per location (maximum of 4,890 caps) every time you return to the Ranger compound and talk to her. (You do NOT need to carry the module everywhere; you just need it when talking to Reilly.)

Retrieved from "https://fallout.fandom.com/wiki/Geomapping_with_Reilly?oldid=3104323"
Community content is available under CC-BY-SA unless otherwise noted.
... more about "Geomapping with Reilly"
RDF feed
Has platform
PC +, Playstation 3 +  and Xbox 360 +