Geofrey Darrow is a comic book artist and designer born in Cedar Rapids, Iowa, United States. He is known for having an extremely high level of detail in his work. He created the cover for the Fallout graphic novel All Roads.[1] His work on Hard Boiled was also an inspiration for the original Fallout, including the 10mm pistol being based on one used by the protagonist throughout the story. 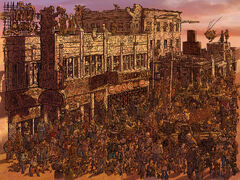 The All Roads cover
Add a photo to this gallery

Retrieved from "https://fallout.fandom.com/wiki/Geofrey_Darrow?oldid=3398464"
Community content is available under CC-BY-SA unless otherwise noted.