Generators are required to produce electricity for settlements. Once a generator has been constructed, it is necessary to connect it with copper wires to a power grid to harness its power. The power can then be used to power other settlement objects such as lights, turrets, water purifiers, and other utilities.

The base game includes four types of generators; three other types are added through add-ons.

This generator is silent but is noticeably more expensive in the power-to-cost ratio.

These generators are the cheapest source of electricity for settlements of small and average size. Of the three, the small generator has the best power-to-cost ratio. The large generator requires nuclear material to build, unlike the other two.

The small and medium generators are the only generators to easily fit inside regular wooden structures.

This reactor was introduced by the Wasteland Workshop add-on. It is a near-silent power source. It provides 100 units of power, 10 times as much as the large generator, its closest contender, albeit requiring four ranks in the Science! perk rather than just one rank.

Fusion generators can be shut down and powered back up by pressing upon the fusion core in the main panel.

This reactor was introduced by the Vault-Tec Workshop add-on. The reactor is quiet and produces 50% more energy than the fusion generator. It requires more resources and requires much more open space in settlements. The Vault-Tec reactor has the ability to power floors and walls that have a direct connection to it even without cables. The power can be used by attaching an electrical outlet to the connected wall.

The Vault-Tec super-reactor was introduced by the Vault-Tec Workshop add-on. Another quiet variant, the super reactor produces five times more power than the fusion generator but costs 8.3 times more nuclear material to build. It also takes up a substantially larger floor area than other generators.

This item is limited to Vault 88 until the end of the quest Lady Luck.

This item is limited to Vault 88 until the end of the quest Lady Luck.

Each settlement may have one or more power grids. 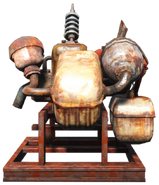 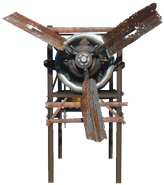 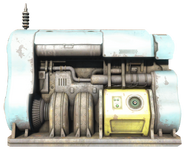