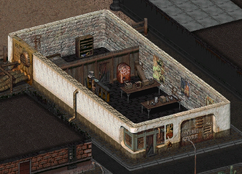 The general store is a small shop owned by Liz in 2241. It is located in the downtown section of Broken Hills, next to the generator shack and the bank. The store sells various supplies.

The store is rectangular in shape and consists of three rooms, including the store itself, Liz's bedroom, and a hidden weapons cache. The cache can be accessed via a ladder under a rug in Liz's bedroom. The store section has a working Nuka-Cola vending machine and two shelving units. The weapons cache consists of a multitude of guns within a few crates, shelves, and a singular locker.

The general store appears only in Fallout 2.

Retrieved from "https://fallout.fandom.com/wiki/General_store_(Broken_Hills)?oldid=3415206"
Community content is available under CC-BY-SA unless otherwise noted.