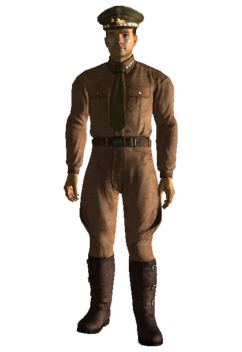 The General Oliver's uniform is a piece of clothing in Fallout: New Vegas.

General Oliver's uniform consists of a pair of khaki pants worn with black calf length boots, a matching kahki button-up shirt with gold stars set on the collar, a dark green tie, and a khaki peaked cap with more gold stars and a NCR emblem on the crest. It provides no Damage Threshold, but provides a bonus of 2 to Charisma and 20 to Action Points.

This is one of the few clothing items in Fallout: New Vegas that provides a bonus to Action Points, however, it is only attainable in the very last moments of the game.

This uniform is found on the corpse of General Oliver in the Hoover Dam offices after the Courier kills him for Caesar's Legion in the quest Veni, Vidi, Vici. He can also be killed at the Legate's camp in No Gods, No Masters, or All or Nothing.

Under normal gameplay, the player character only has a limited amount of time to use the uniform due to the story ending immediately after it is obtained.