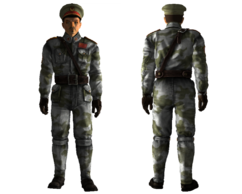 General Jingwei's uniform and the Chinese General hat are worn by General Jingwei inside the Anchorage Reclamation simulation in the Fallout 3 add-on Operation: Anchorage.

Likewise, the Chinese General hat sports a higher damage resistance and item health than the Chinese commando hat and has the highest DR of any clothing in the game.

Retrieved from "https://fallout.fandom.com/wiki/General_Jingwei%27s_uniform?oldid=3402183"
Community content is available under CC-BY-SA unless otherwise noted.