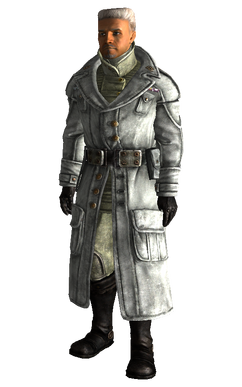 General Chase's overcoat is a unique piece of clothing in the Fallout 3 add-ons Operation: Anchorage and Mothership Zeta. It is a US Army officer uniform (winterized type) worn with an LAS-009 General's overcoat over it.[1]

A variant of the overcoat is worn by General Constantine Chase inside the Anchorage Reclamation simulation. It cannot be repaired by merchants and sports a Damage Resistance of 20 as well as bonuses of 1 to Charisma, 10 to Small Guns and 5 to Speech.

The outfit is available to the player character only through the use of console commands in the pc version or by hex editing on the Xbox 360.

The non-simulation version of Chase's overcoat can be found aboard Mothership Zeta. The difference between this version and the simulation version is an increased weight, the ability to be repaired, and that this version appears as winterized combat armor (a programming error). As such, it provides a Damage Resistance of 20 as well as bonuses of 1 to Charisma, 10 to Small Guns and 5 to Speech.

Talk to Sally, who says she did not know the player character would also go exploring. She starts the mobile trash bin before one can get out. After a few trash stops and some aliens, she gets out, tries "something" and one then gets bumped around and then 'dumped' into the waste pile - injured. Use the door to the right. The first room has the smashers and the two safes and a med box on it to the left following the path around - but they are on the other side of the smashers. After passing through this room comes the longer hallway with a guardian drone along with a healing archway to the right. The next room has a drone in it as one proceeds through it to the doorway, Sally lets the player character know that "some aliens are coming from behind you" and she will try to hold them off, in that next room - just past the entrance and to the right - (this is a high-ceiling room with a low metal catwalk and railing) the locker is on the floor and to the right, it is against the wall with a container to its left side.

NOTE: The teleporter to the Maintenance Level is only active between the start of Among the Stars and the destruction of the three generators.

Though the icon is properly displayed on the Pip-Boy, the model of the Mothership Zeta version of the coat is actually winterized combat armor. It can be assumed it was intended to look like the version found in Operation: Anchorage, based on the unused Zeta-specific Colonel Autumn's uniform which does resemble the Anchorage version. [verified]

The overcoat and Anchorage quartermaster shipment 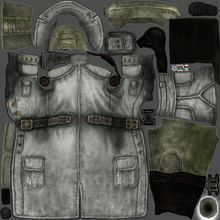