Fallout 4
“} All right, maggots, listen up! I want your stores cleaned yesterday! Move it, move it!”— the Director

The General Atomics Galleria is a location in the Commonwealth in 2287.

A pre-War relic, the galleria was meant to be a demonstration of what a town's commercial district would look like if it were run entirely by robots. Inhabited only by Mr. Handies and Mr. Gutsies of varying personalities, the location is entirely oblivious to the War.[Non-canon 1]

Just prior to the War, a grand opening supervisor was meant to arrive, whom the Sole Survivor can masquerade as in order to gain further access to the location. A manual password override can be found at the terminal in the back of the bowling alley, while the prior supervisor's password keycard can be found in the Director's office to the left of their desk.

The various shops around the galleria remain open but will not operate normally until the grand re-opening event has been officially triggered. Due to errors in the Mr. Handy robots' programming, many interactions can result in the shopkeepers and inhabitants attacking the Sole Survivor, resulting in the destruction of robots that would have otherwise become vendors.

Buildings are arranged in a circular fashion around a courtyard, in which a central control tower is located. Behind the Advanced-locked door in Madden's gym is a terminal that can be hacked to activate a "Manager's Sale," providing a 25% discount. In clockwise order:

When going up to the director's office, the Sole Survivor will have several interactions available, all of which will result in the Director demanding that they identify themselves.

Several options involve passing Speech checks, although it is also possible to acquire a General Atomics ID card from the General Atomics factory, which will bypass the Speech checks entirely; in doing so, the director will gift a gold watch for 275 years of continued service. By succeeding any of the Speech checks, or by presenting the ID card, the galleria can be re-opened, allowing the grand prize for the re-opening raffle to be obtained. If attempting a Speech check (difficulty not dependent on Charisma), and failing, the Director will become hostile along with all the other robots at the facility.

Alternatively, if the director has been destroyed, one can use a password saved in the supervisor's terminal to access the computer in the director's office, where normally, the terminal's functions are disabled so long as the director remains functional. This terminal will provide the Sole Survivor with the options to start the grand re-opening on their own, permanently disable all of the residing robots, or initiate a self-destruct sequence. Updating the director's computer's firmware (re-opening the galleria) will immediately end the hostility of all the remaining Mr. Handies.

The General Atomics Galleria appears only in Fallout 4.

Bakery ticket 1,6,7 and 8 located inside the bakery 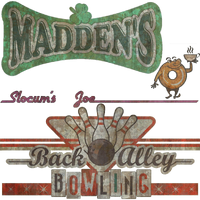 Logo illustration from The Art of Fallout 4