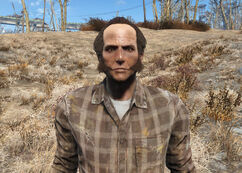 “Nice dog! But he looks lonely. Don't you think he could use a playmate?”— Gene's initial dialogue if the Sole Survivor's companion is Dogmeat

Gene is a dog breeder wandering in the Commonwealth in 2287.

Gene wanders the Commonwealth to sell dogs he raised himself, albeit begrudgingly, stating that he "feels blue for a week after selling a dog."

Here is a method to add Gene back to the random encounter pool if he has died (PC only):

After doing this, Gene will be re-added to the random encounter pool and can be encountered again in the Commonwealth. This may also work with other random encounter NPCs who have died (although some random encounters exist in different rooms, so it is important to verify if they were in this room to begin with.)

Gene appears only in Fallout 4.

Gene and his dog
Add a photo to this gallery
Retrieved from "https://fallout.fandom.com/wiki/Gene?oldid=3460680"
Community content is available under CC-BY-SA unless otherwise noted.
... more about "Gene"
RDF feed
Has platform
PC +, Playstation 4 +  and Xbox One +