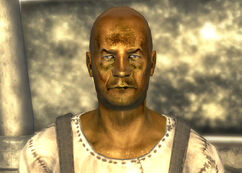 “Typically, I find it goes down better if I leave people guessing. So what do you say, want some?”

Genaro is a food merchant living in Freeside in 2281.

Genaro can be found in Freeside by the north gate selling different types of food. When asked where he gets his food from, he is reluctant to give much information besides the fact that he has helpers around bringing him different types of food to cook, and that he doesn't want to give too much information because the customer may not want to eat it afterward. Judging by his inventory, he has helpers bring animals and insects off the street for him to cook and sell.

Genaro's available items are almost exclusively food items of relatively low quality, the only exceptions being gecko kebabs, gecko steak, and mole rat stew. His inventory consists of the following:

Additionally, Genaro's stock is supplemented by the items displayed on his table. These items do not reappear once they are sold.

Retrieved from "https://fallout.fandom.com/wiki/Genaro?oldid=3499624"
Community content is available under CC-BY-SA unless otherwise noted.