Geckos are mutated lizards prized for their sleek and durable hides.[1] They are known to inhabit the Mojave Wasteland and New California and its surrounding areas.

Before the Great War, they could be found in warm climates throughout the world, ranging from 0.39 in (1.6 cm) to 27 in (60 cm) in size, with the particularity among other lizards to make chirping sounds in social interactions with others. After the Great War, they've mutated, causing them to grow to giant size. Most of them evolved due to their exposure to the mutated F.E.V. in the air coming from the West Tek research facility, while some emerged due to other toxic conditions like massive radiation spills. These geckos are the result of an unknown species of lizard indigenous to the Oregon-California border regions, which have mutated after exposure to mutated FEV.[Non-canon 1] The mutation made them bigger, stronger, faster, and more fertile. The initial rampant mutation took several generations to stabilize, but once it did, the geckos became highly reproductive. In fact, their breeding rate is second to rats that were exposed to trace amounts of mutated FEV.[Non-canon 2]

Modern geckos are large, easily capable of growing to the size of a small child and beyond in certain cases. They have a hunched posture, a varied coloration of skin (closely related to their size and behavior), and tend to live in packs. While geckos are peaceful and non-threatening, they exhibit a pack mentality. If a single gecko attacks or is attacked, the remaining pack will join, charging the attacker fangs and claws bared.[1]

Among hunters, geckos are prized for their hides. Regular gecko hides trade for $25 NCR circa 2241, with other varieties bringing in even more cash for trappers.[1] The thick hides are perfect for manufacturing leather implements, like leather armor.[2] Gecko meat is also appreciated as a foodstuff. If cooked right, it tastes like canned chicken.[3]

Geckos are reptilian in appearance and sport a pair of frills behind their head. Their eyes generally have an orange tint, and their body colors differ greatly based on the individual gecko type. Most geckos have five fingers, five toes and have kept their pre-War ability to make chirping sounds in social interactions with each other. Gruff breathing, squeaking, and cooing can be heard from time to time in gecko-inhabited areas. Like their pre-War cousins, Geckos lack eyelids and tear-ducts and can often be seen using their elongated tongues to lick at their eyes, clearing away dust and small debris. Most regular geckos are peaceful, unthreatening creatures, but if one gecko is attacked, the rest of the pack in the area will quickly converge on the attacker,[1] charging quickly with their mouths open and rapidly attacking with bites and swipes from their clawed hands.

Normal geckos and golden geckos have hides that can be turned into all sorts of useful and attractive clothing items. Dresses, jackets and even armor can be constructed from their durable pelts after they've been tanned.

The regular gecko is a small-medium-sized gecko with indigo skin. Like their cousins the silver geckos, they are mostly peaceful but tend to be rather aggressive in groups. They are very quick on their feet and are fond of using their numbers to rush and overwhelm the opponent.

The silver gecko,[4] also called little gecko, is a small-sized gecko with silver skin. They are the smallest and least aggressive of all geckos[1] and are not very resistant to damage. They have thus far only been observed in southern Oregon.

The golden gecko is a medium-sized gecko with golden skin. They are a more beautiful, but also more deadly kind of gecko than regular geckos and silver geckos. They can be found around irradiated areas which they lick up toxic waste, causing their particular mutation[5][6] different than any other kind of geckos, and making their attacks to irradiate the opponent. They can be found in southern Oregon and the Mojave Wasteland.

The fire gecko is a medium-large sized gecko with dark violet skin. They are the second deadliest kind of gecko after the green gecko and, as indicated by their name, can breathe fire due to their constant exposure to sulfur that is now held in their digestive system. Unlike other geckos, they also have large spikes or decorative frills that cover their heads down to their lower back. They are immune to fire and their hides are far too mangy or burned to have any true value. They can be found in northern California and the Mojave Wasteland.

The green gecko is a large gecko with shiny light green skin. They are the most deadly of all geckos and can spit several slow-moving and far-reaching globs of poisonous saliva similar to centaurs. Despite their fragile appearance, they have a high resistance to damage. The cause of their mutation is currently unknown, though some theorize it might be due to the ingestion of poisonous plants native to Zion. They can only be found in Zion Canyon.

Called simply gecko when spawned, Gojira is its editor ID. Its model is identical to that of the fire gecko, but triple the size, making it roughly equal to a super mutant behemoth in height. It has its own unique embedded fire breath weapon called 'Gojira Flame' (formid 0011324a) which has a base damage of 400 and an incredible damage per second of 3,200, and a staggering 8,000 HP, making it the strongest creature in the game.

"Gojira" is the Japanese name of Godzilla. It was never meant to be in the game and was rather created by one of the developers as a joke.[Non-canon 3] 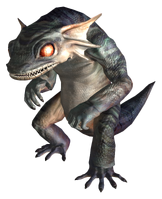 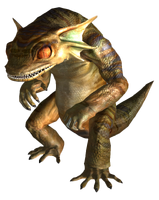 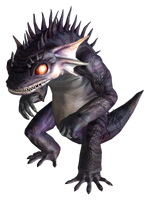 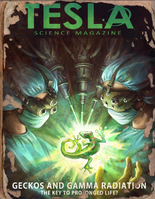 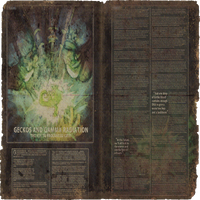