“Well, you see it's like this - golden geckos and regular geckos are basically the same critter except the golden's got a big second helping of sheer cussedness...”— Smiley

Geckos are creatures found in New California of 2241.

Before the Great War, geckos could be found in warm climates throughout the world. After the cataclysmic nuclear holocaust, they've mutated, and have grown to exceptional size; easily standing as tall as a young human child. Some are thought to have evolved due to their exposure to mutated FEV in the air, leaking out from West Tek Research Facility, and yet others are thought to have mutated through exposure to other toxic, or irradiated, areas of the wastelands.

Geckos were originally small reptiles, ranging from .6 inches to 24 inches in size, with the particularity to make chirping sounds in social interactions with others of their species. After the War, they evolved to stand as tall as human children and permanently walk on their hind legs. They are agile, tenacious little creatures and their jaws are filled with sharp teeth.

Geckos almost always live in groups, as they share hunting grounds, and as such they use their strength in numbers when combating a foe, often trying to outnumber their enemies. The smallest geckos, little geckos, have horrible perceptive abilities, as evidenced by their terrible detection AI, and as such a player character could walk right in front of them and avoid detection. This trait is not shared with the larger brethren of the little gecko.

The little geckos, sometimes known as silver geckos, are small, relatively feeble reptiles, and individuals pose little threat to wary travelers. They appear quite early on in the game when the player character embarks on a quest to save a dog in the hunting grounds of Arroyo, where a small population of geckos roam. They have a horrible sense of awareness, and as such can be easily avoided.

Golden geckos are beautiful creatures, but all the more deadly nonetheless. They are most often found near areas of toxic waste,[1] which they often seem to ingest, and many believe there is a correlation between golden geckos and radioactive waste.

The fire gecko is by far the most lethal of all geckos featured in Fallout 2, and they appear mostly in the late game. As might be evident by their name, they can breathe fire for devastating damage, and are very resilient adversaries, in contrast to their decisively weaker brethren. Unlike other geckos, they cannot be skinned, as their hides are far too mangy and burned to be worth anything. They are immune to fire damage. 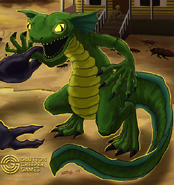 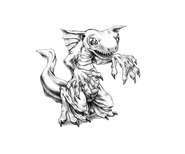 Retrieved from "https://fallout.fandom.com/wiki/Gecko_(Fallout_2)?oldid=3254742"
Community content is available under CC-BY-SA unless otherwise noted.