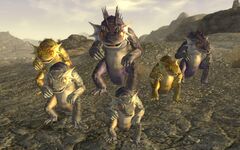 The various geckos appearing in the base game

Geckos are creatures in the Mojave Wasteland.

Geckos can be found living across the entire Mojave Wasteland, with many different species calling the local area their breeding grounds. They are said to have been stemmed from the Fire Root Cavern.[1] There are three types of gecko in the Mojave: normal geckos, golden geckos, and fire geckos. Another variety, the green gecko, is found in Zion Canyon in the Fallout: New Vegas add-on Honest Hearts.

Geckos in general are reptilian, and are normally born with a pair of fins behind their heads. Their eyes possess an orange tint, and their body coloration differs greatly based on the gecko sub-species present. Geckos have evolved with five fingers and five toes.

Geckos are generally found in small packs. They charge or leap at their opponents with their mouths open ready to snap down, along with being known to simply attack with their claws rapidly. Some sub-species of geckos can breathe fire or spit poison, so that they may also attack from a distance.

Their hides and meat prove as useful Survival crafting ingredients; in particular the hides, once tanned, can be used to craft several varied types of armor which offer greater defense than their base variants along with resistances to fire, poison, and radiation.

Geckos, green geckos, and golden geckos are affected by the Animal Friend perk. Fire geckos, however, remain hostile to those players with the perk.

Geckos appear in small to large packs depending the location. They will charge at their prey with their mouths open, and attack by biting and with swipes from their claws. Geckos can be found mostly in the areas surrounding Goodsprings, along the I-15 towards Primm and the Mojave Outpost. These are the least dangerous species of gecko found within the Mojave.

Gecko hunters look identical to normal geckos, but have greater health and speed. They are very fast and will attempt to rush and overwhelm their prey by attacking in groups.

These immature geckos are smaller and weaker than adult gecko hunters, but attack in the same way. Although appearing as hostiles on the compass, they often ignore nearby life unless provoked.

A type of gecko with brilliant golden scales. They can be found around irradiated areas, such as Crescent Canyon east and Crescent Canyon west, Vault 34, and Cottonwood crater. Golden geckos have been affected by high levels of radiation, causing their larger size and unique coloration. In addition, exposure to radiation has caused their attacks to inflict significantly large numbers of rads.

These geckos may appear alongside golden geckos, and attack in the same way. Their bites are similarly irradiated, in addition to causing regular damage.

Golden geckos who have yet to mature. They are seldom found alone, and are usually found with adult geckos.

Fire geckos have mottled purple and red hides, and prominent spikes on their backs. In addition to their bite and claw attacks, they have the ability to breathe fire. They can mainly be found in and around mountainous areas and caves, such as the Lucky Jim Mine and Nopah Cave.

These immature geckos are smaller and weaker than adults, but attack in the same way and share the ability to breathe fire. They may be encountered in groups with full-grown fire geckos.

The legendary fire gecko is one of the five legendary creatures. It is roughly twice the size of a normal fire gecko, and its powerful and fast attacks makes it a dangerous opponent in close combat. It is found in Fire Root cavern.

Young green geckos are smaller and weaker than adults, but spit poisonous saliva and attack in the same way. They are only found in Zion Canyon.

Another type of giant creature native to Zion Canyon, these geckos are larger than a human and have almost the same destructive power as the legendary fire gecko. 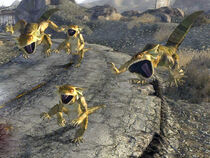 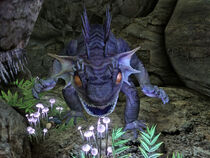 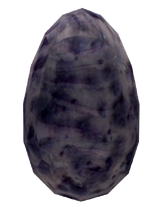 Hydrodynamic form of a swimming gecko as seen from above the water. 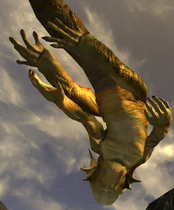 Hydrodynamic form of a swimming gecko as seen from under water. 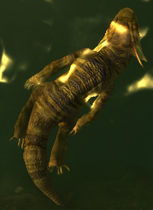 View from below a Golden Gecko swimming.
Add an image to this gallery

Retrieved from "https://fallout.fandom.com/wiki/Gecko_(Fallout:_New_Vegas)?oldid=2285224"
Community content is available under CC-BY-SA unless otherwise noted.