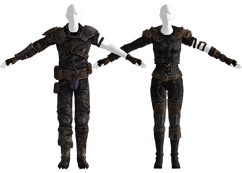 This is leather armor with fire, golden and green gecko hides added as backing. The hide addition provides a significant increase to general damage protection and also gives the wearer improved resistance against fire, radiation and poison.

This armor must be crafted by the player character. It cannot be found on enemies or in containers.

Originally, when the armor was created it started at 100% condition. After a patch and the Old World Blues add-on, its condition is dependent on that of the armor used to make it.