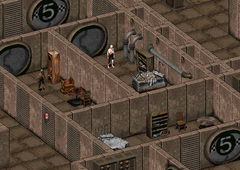 Search these two shelves and locker for access to all areas in Gecko's power plant!

Once the Chosen One enters the plant, they are greeted by a guard at the reception area. Jeremy is in the supply room on the player character's left, and the entire section is the living spaces for the ghouls, mainly Gecko's glowing ones. Separating this area from the rest of the complex is a checkpoint requiring a yellow pass key to pass.

This section requires the yellow pass key to gain access and contains the plant's control center, more living areas, including those of Festus, the reactor foreman. He can be pickpocketed for a part requisition form and a red pass key can be found in a locker in the first room on the left after entering the yellow area.

This section requires the red pass key to gain access. Hank watches over the control room of the reactor from this point, which also contains a computer with the controls for the maintenance robot, and a link to PoseidoNet, which provides the Chosen One access to an Enclave security station on the Enclave Oil Rig. The player character can install the needed part by hand or with the robot or overload the reactor manually. Radiation levels inside the core are very high. 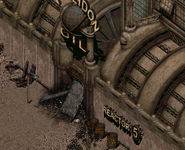 The power plant's destroyed entrance after causing a reactor meltdown

Power plant in the good endings

Power plant in the bad endings

Location in the 1998 press pack