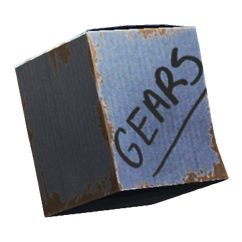 Gears are crafting components in Fallout 4.

Small, metal wheels with toothed edges used primarily for mechanical devices. Gears are used in some mods for weapons and robots, as well as turrets and other machines for settlements.

In the crafting requirements or when previewing the scrapping of items, the crafting resource is called just "gear," but the item is actually called "gears" is produced from scrapping and is used in crafting.

Retrieved from "https://fallout.fandom.com/wiki/Gears_(Fallout_4)?oldid=3446063"
Community content is available under CC-BY-SA unless otherwise noted.