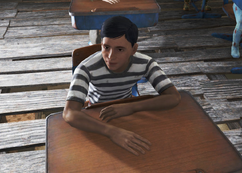 Gavin Everitts is a young boy living in Diamond City in 2287.

He is one of the children living in Diamond City. During the day he attends the school run by Mister Zwicky and his robot, Miss Edna. He sometimes lacks focus and may get flustered at the mere hint that he is falling behind, despite this he actually shows good potential academically.

He is also friends with Sheng Kawolski, who has been telling him that water sourced outside of Diamond City makes people sick.

Gavin Everitts appears only in Fallout 4.

Retrieved from "https://fallout.fandom.com/wiki/Gavin_Everitts?oldid=3292042"
Community content is available under CC-BY-SA unless otherwise noted.