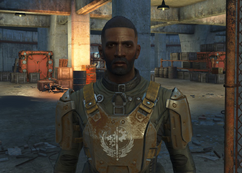 Knight Sergeant Gavil is a Brotherhood soldier at the Boston Airport. He is the head of the BOS logistics division in 2287.

Gavil is in charge of the Brotherhood's logistics division. The division is headquartered at the Boston Airport. He keeps track of supplies and food rations coming in and out of the supply depot. Recently, suspicious activity has been taking place at the airport.

Food rations were disappearing by night. Gavil suspects that one of the soldiers assigned at his division is responsible for the thefts.

Retrieved from "https://fallout.fandom.com/wiki/Gavil?oldid=3258068"
Community content is available under CC-BY-SA unless otherwise noted.