The Gauss rifle is an advanced sniper rifle included in the Fallout 3 add-on Operation: Anchorage.

The Gauss rifle has the ability to knock down enemies on critical hits, and the buggy V.A.T.S. performance and low magazine size limits its usefulness in close-quarters combat.

The Gauss rifle can fire a total of about 375 shots from full condition before breaking.

In the Capital Wasteland:

In the Anchorage Reclamation simulation: 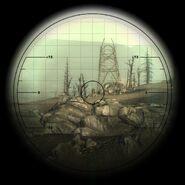