The Gauss rifle is a ranged weapon in Fallout 76.

The Gauss rifle can be modified with additional capacitors, a shielded barrel, and a compensator or suppressor.

Capacitors and exposed copper wiring run alongside the barrel, and a Nixie tube display above the stock displays the weapon's charge percentage. The rifle operates on a charging principle: Depressing the trigger gradually increases the charge level of the capacitors. As the charge level increases, the damage output of the round increases accordingly. The damage for less-than-fully-charged rounds is calculated proportional to the charge level at the time the round is fired.[verification overdue] It is fed rounds through a rear-mounted cylindrical magazine and its projectile produces a momentary blue trail.

The Gauss rifle is chambered for 2mm EC rounds as opposed to the microfusion cells used by the Anchorage-era variants. The Gauss rifle fires an explosive projectile that deals explosive area-of-effect damage. This enables the Gauss rifle to hit multiple targets with a single shot, provided they are clustered together in very close proximity to each other. Due to the amount of recoil and the charging rate, this weapon will not achieve the fire rate listed in its statistics. The actual fire rate is closer to 10. 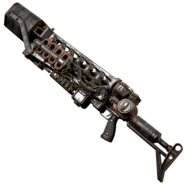 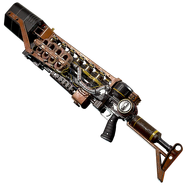 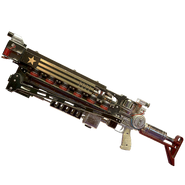 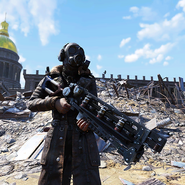