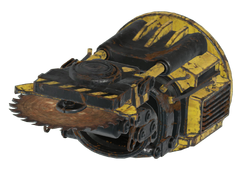 The gauntlet is a weapon in the Fallout 76 update Wastelanders.

The gauntlet is a large metal device painted with yellow and black stripes. Worn over the forearm, it has a powered saw blade extruding from the end.

The main advantage of the gauntlet is being able to find desired combinations of legendary effects faster via crafting. As with other weapons only available after the main questline of Wastelanders, gauntlets cannot be traded, dropped, or sold to vendors.

Gauntlets are always crafted at the maximum level available to the player character. The weapon will be a one-star, two-star, or three-star legendary weapon with randomly determined effects.

Weapon mods can only be crafted if the corresponding plan is known. Mod plans for the gauntlet are bought from Samuel for gold bullion and cannot be learned from scrapping gauntlets. It has the "bladed" modification installed by default.

Retrieved from "https://fallout.fandom.com/wiki/Gauntlet_(Wastelanders)?oldid=3267281"
Community content is available under CC-BY-SA unless otherwise noted.