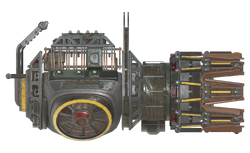 The Gatling plasma is a weapon in Fallout 76.

The Gatling plasma is a heavy energy weapon and is affected by perks in those two categories. It fires very rapidly with relatively poor accuracy. Rather than individual bullets or cells, it uses plasma cores, generally only found in higher level areas of the map. They can also be crafted. Reload is slow and the gun must "spin up" before it starts firing.

‡ Acquired through scrapping the weapon

When hip-fired or at a close target, the projectile has a tendency to clip through the target. [verified]

Oblique view
Add a photo to this gallery
Retrieved from "https://fallout.fandom.com/wiki/Gatling_plasma?oldid=3407393"
Community content is available under CC-BY-SA unless otherwise noted.