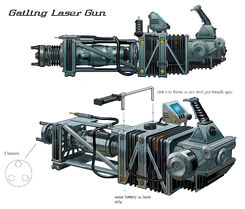 The Gatling laser is a weapon in Fallout 3.

One can easily take out any threat at a safe distance with a Gatling laser. At long range, it is actually an incredibly accurate weapon, though it performs poorly in V.A.T.S.

At point-blank range, it actually aims a bit lower than the cross-hair. This is easily observable when trying to shoot a corpse's head off while standing on top of it.

Although a very powerful weapon against targets of every type, this weapon is very rare in the Capital Wasteland without the Broken Steel add-on.

The Gatling laser can fire a total of about 3125 beams, the equivalent of 13 reloads, from full condition before breaking.