An H&K L30 Gatling laser (also referred to as the Sunbeam Gatling laser[1]). Designed specifically for military use, these were in the prototype stage at the beginning of the Great War. Multiple barrels allowed longer firing before overheating. These models are powered by microfusion cells. 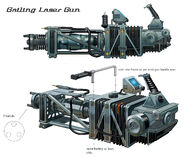 Similar to its predecessor, this model is fully automatic, providing that charging barrels have not been installed. However, it utilizes a fusion core as ammunition rather than a battery pack, and features four rotating AER9 barrels firing laser pulses through two lenses (as opposed to merely firing in a rotating order).

A Gatling laser model that is mounted onto the left arm of the PDQ-88b Securitron.[3][4]