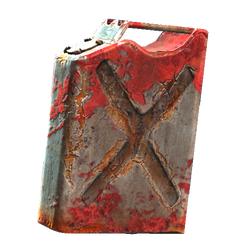 A gas canister is a junk item in Fallout 4 and Fallout 76.

A bright red metal gasoline canister covered in rust, still containing some amount of gas. If shot or damaged, gas canisters will explode in a small fireball, which can hurt the player character and other nearby NPCs.

The gas canister can be broken down into its individual components for use in crafting:

Retrieved from "https://fallout.fandom.com/wiki/Gas_canister?oldid=3044678"
Community content is available under CC-BY-SA unless otherwise noted.