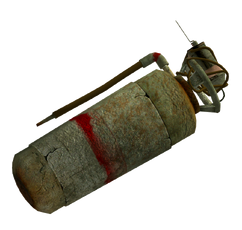 The gas bomb is a placed explosive weapon in the Fallout: New Vegas add-on Dead Money.

The gas bomb is an improvised explosive incendiary device. It is constructed from sensor modules strapped to a fire extinguisher. The weapon functions like other land mines, and will burst into a ball of fire and shrapnel, setting the target alight, causing explosive and fire damage.

It is thrown a short distance when placed, similar to the MFC cluster, instead of being dropped nearby like other mines. Like all other placed explosives, it cannot be used in V.A.T.S.

This weapon can be crafted by the player.

Used by and found on ghost seekers in the Sierra Madre.