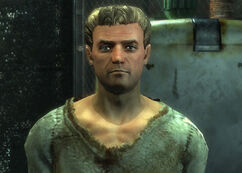 “Let me introduce myself. I am Gary Staley gourmet chef and gourmand. I'll be preparing your meal.”

Gary Staley is a trader who lives in Rivet City in 2277.

Gary Staley was born in 2227. The owner and proprietor of Gary's Galley, 50-year-old Gary considers himself a gourmet chef, but his restaurant serves little more than scavenged canned food and some fruits and vegetables (though occasionally he obtains some really high-quality produce from the hydroponics bay, which he sells at exorbitant prices). He loves his 16-year-old daughter, Angela, and she loves him, but he neglects her in favor of the restaurant.[1]

Gary's medical information may be accessed from Dr. Preston's terminal in the Rivet City clinic:

Exhaustion. The man really needs to take a rest at some point. But then again, who doesn't?

* Only if Angela is also dead.

Staley appears only in Fallout 3.

Retrieved from "https://fallout.fandom.com/wiki/Gary_Staley?oldid=3183488"
Community content is available under CC-BY-SA unless otherwise noted.