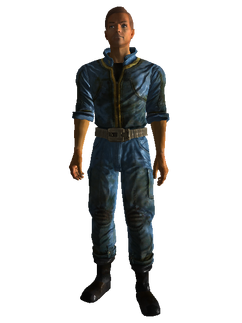 Gary was one of the original inhabitants of Vault 108, and clones of him are the only people left in the vault by 2277.

Part of a grand cloning experiment that led to a horrific end for the instigators, 54 clones of "Gary" were created, but each began to exhibit psychotic tendencies to the scientists who created them. Eventually, they rebelled and took over the vault completely, and have evolved a complex and subtle series of ways to say "Gary" to convey their emotions. They are deranged and attack anyone that isn't Gary.[1]

A holodisk found in the Vault 108 cloning lab, named "cloning log," explains that Gary was cloned at least 54 times; all clones exhibited hostility towards non-clones, with each successive clone being more and more violent. It is uncertain why the scientists continued to create homicidal clones or, indeed, why they started.

When the vault scientists started running out of room to store the clones, they planned to destroy some of them to make room for additional test subjects. Apparently the clones objected to this, escaped, and slaughtered the rest of the vault's inhabitants. It seems most of the Garys either escaped or were killed, as the vault door is found open upon discovery, and Gary 23 is located far away from the vault.

Curiously, the Gary clones found in Vault 108 use almost entirely different ways of saying "Gary." The reason for this is not explained or even hinted at, but might be an intended joke by the developers.

In charge of Vault 108's vacuum-cleaning maintenance program, Gary 23 (or "Gary" to his brothers) was kidnapped in a daring raid by Defender Morrill. He was dragged back to the Bailey's Crossroads Outpost in the D.C. Metro Ruins. As Gary 23 utilized a Pip-Boy, Specialist Olin attempted to remove the device to gain access to a simulation pod inside the outpost. The operation was deemed a complete failure.[1]

In the Outcast outpost (from the Operation: Anchorage add-on), a dead Gary (Gary 23) can be found wearing a Vault 108 jumpsuit in the locked room (Lockpick 25) across from Protector McGraw. Gary 23 has nothing on him and his jumpsuit cannot be removed. His left arm has been cut off, and there are medical tools nearby. It seems that the Outcasts tried to remove his Pip-Boy 3000 through the removal of the limb in order to use the military VR pod in order to gain access to an armory that opens once the simulation is complete. Specialist Olin also comments on how it wasn't her fault "what happened to the first guy." Gary's complete interrogation log was cut from the game, but can be obtained through console commands if one wants to know exactly what happened to him.

The Gary clones appear only in Fallout 3. Gary 23 appears (dead) in the Fallout 3 add-on Operation: Anchorage.

Dead Gary in the 'interrogation' room of the Outcast outpost from Operation: Anchorage

Retrieved from "https://fallout.fandom.com/wiki/Gary_(clone)?oldid=3272367"
Community content is available under CC-BY-SA unless otherwise noted.