Garrahan Mining Company was a pre-War company that operated in West Virginia.

The Garrahans and Hornwrights were the two major families in charge of Appalachia's mining industry. They owned lavish estates in the mountains overlooking the mines.[1]

Formally named the EX-17 Excavator, the power armor project was headed by Harold Frost, siphoned off directly from the United States Army Research Corps in early 2075. The project made headway at first and Frost was confident he could deliver a prototype within months.[2] However, durability issues manifested quickly due to the stress caused by mining. By September 2075, the research team settled on using black titanium, native to Appalachia, due to its tensile strength. The sheer expense was considered an acceptable tradeoff.[3] The suit's extra weight made a more efficient reactor necessary. Although the team continued to experiment with new solutions as late as May 2076, Frost's team had to go for broke[4] and go with an ultracite reactor. In exchange for AMS' proprietary ore, they had to make a decade-long commitment to AMS technology. It was Christmas 2076.[5] It allowed the team to complete the project in February 2077, three months ahead of schedule, hastened by AMS' reveal of Watoga and Hornwright Industrial Mining Company launching the Auto-Miner industrial robot line.[6]

By April 3, 2077, the choice proved to be a sound one. Three complete Excavator units were operational, with a spotless maintenance record, no breakdowns, and records broken for the amounts of ore extracted in a single day. CEO Garrahan decided to play all-in, challenging Hornwright Industrial Mining Company to a duel where the Excavators and Auto-Miners would compete to mine the most ore in a pre-set amount of time. The challenge was a calculated risk, aiming to raise the profile of the company and the project while securing lucrative contracts in the increasingly automation-obsessed Appalachia.[7] To make things worse, Garrahan was affected by the fallout from Hornwright and AMS' handling of the miners in Appalachia: Although Garrahan employed miners and tried to pay them proper wages, the Welch riots that engulfed Appalachia hit them by proxy, leading to walkouts and property damage. However, when the riots petered out around October 5, after the Bramwell bombing that toppled a Mega Mansion, Garrahan remained ready to negotiate with the group of miners willing to come to the table.[8] Although a settlement was reached on October 12, after a week of tense negotiations, Garrahan was put back at square one by the ill-advised actions of Bill Garrahan. Bryce's brother possessed a volatile temper, which resulted in him "lending a hand" at the Rockhound by shooting up the machine seized by protesting miners using a custom minigun he commissioned. The miners were not amused.[9]

The challenge turned out to be the decisive battle of the Hornwright/Garrahan war: 24 hours of non-stop mining.[10] The challenge started on October 18 and lasted the whole day, with Auto-Miners and Excavators effortlessly chewing through the rock at their designated sites. They were a match for one another and by the end of the day, Hornwright won by a thin margin, just 1.85 tons - less than a single truckload - and stood supreme. Hornwright Mining seized on this tenuous victory as an example of machine's superiority to man.[11]

However, Hornwright's executives did not play fairly and intervened to ensure that Garrahan would fail through industrial sabotage.[12] However, even if Garrahan could identify the culprit, they lost. Auto-Miners were the talk of the region, while the Excavator power armor project was officially scrapped, with millions sent down the drain, and the company's stock in free-fall. All that Daniel Hornwright had to do was execute a hostile takeover, with the goal of folding the groundbreaking Excavator project into the Auto-Miners, creating a fleet of indestructible, autonomous miners capable of pin-pointing mineral deposits with no oversight from human operators.

For her part, Vivian Garrahan was ready to accept Hornwright's offer of leasing Auto-Miners to up the company's mining output and salvage the situation, as well as stepping down as CEO and handing the company over to her children.[13]

Unlike their closest competitor, Hornwright, Garrahan employed human miners, rather than robotics, and was thus much more vulnerable to the unrest that swept Appalachia in late 2077, as a result of the miners' dissatisfaction with the string of Hornwright firings and the brutal takeover of Welch by Atomic Mining Services. Although the company was ready to call upon the governor and the National Guard if the rioting escalated, Garrahan preferred to negotiate with the miners and reach a settlement where Hornwright would simply ignore them.[14] Vivian Garrahan was determined to find a peaceful resolution, even in the face of HalluciGen's offers to provide the means to pacify the miners by gassing them. Garrahan refused.[15] Negotiations were made problematic by the involvement of one of the family's members, Bill Garrahan, in the attacks on the Rockhound, which forced the company's operations manager back to the negotiations table.[9]

The company's financial problems caused by the rioting and the investment in the Excavator had a cascading effect throughout the company. Proposals to install automated security were routinely denied by Bryce Garrahan, operations manager, due to the potential for expensive criminal liability suits. Unfortunately, the same problems also caused a freeze on the security budget, leading to reduced security staffing at Garrahan mining sites and increased vulnerability to riot-related vandalism.[16]

Garrahan Mining is mentioned only in Fallout 76. 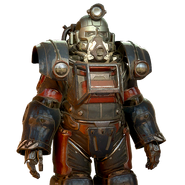 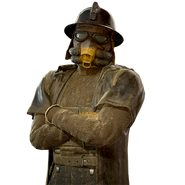 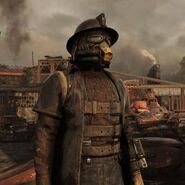