00000207
“Yes, indeed you are. I don't tolerate frightened curs that have no backbone. And what we don't tolerate, we destroy. Kill him.”

Garl's family originally came from Vault 15. When the shelter was opened, his father was part of the group that left and formed the Khans. Since then, the Khans regularly raided Shady Sands for supplies, operating out of a ranch house in essentially the middle of nowhere.[1] Garl was physically abused by his father, until killing him and taking control of the Khans.[2][3] As leader of the Khans, Garl was extraordinarily violent, only accepting the meanest and toughest characters around, who are distinctively bloodthirsty, violent and extreme.[4]

Garl was killed along with most of the Khans by the Vault Dweller, breaking the raiders for decades and allowing the NCR to rise. Garl's son Darion survived and rebuilt the raider gang, hoping to seek revenge on Tandi. [Non-canon 1][5]

Canonically, as established in Fallout 2, Garl is eventually killed by the Vault Dweller along with all other Khans in the Khan camp. A Khan (who does not appear in Fallout) named Darion continues the Khans legacy, carrying on in Fallout 2 as the New Khans.

A male Vault Dweller with a Luck above 8 wearing a leather jacket has a 50% probability to be mistaken for Garl's father, the original Death-Hand and original leader of the Khans. Everyone in the camp gets freaked out by the "ghost of Death-Hand" returning since Garl killed him to gain control of the gang.

Garl appears only in Fallout and is mentioned in Fallout 2 and in the Fallout Bible.

If Ian kills Garl and not the Vault Dweller, they will receive the "bad" ending for the Khans where they continue to pillage the Northern Wastes, even if every Khan was killed.[verified] 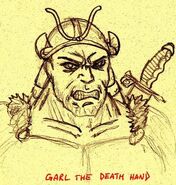