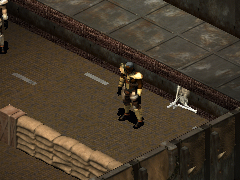 “That's far enough! I knew I smelled Brotherhood in the air. I've been studying up on you military types since I first heard you were sniffing around this region. But I gotta tell you, I aint impressed. What were you going to do anyway? Kill little old Gargantua? I don't think you even have enough ammo to piss me off! And wait, don't tell me! You're all little Initiates, aren't you? Haha! You mean to tell me that they couldn't even rustle up some Paladins to take me on? You know what that is? That's disrespect! Nobody, NOBODY disrespects me! I'm gunna do things to you that a lonely tribal wouldn't do to his neighbours brahmin! But don't worry, by that time you'll already be dead. You should've just walked away. Mwaahahahahaha.”

Gargantua is a leader of a large group of raiders who opposed the Brotherhood of Steel in 2197.

Gargantua is an African-American man with quite a hot temper and a sense of power. He commanded his fellow raiders to attack a village called Dirt Haven, which was under protection of the Brotherhood. This led to an assault on his main base in Devil's Graveyard.

He was confronted by the Brotherhood's initiates when nearly all his men were killed, including Psycho and the ones led by his lieutenant, an unnamed raider leader, in Dirt Haven. Gargantua was angered by the fact that his enemies were only initiates, and not the paladins whom he expected to see.

Retrieved from "https://fallout.fandom.com/wiki/Gargantua?oldid=3298116"
Community content is available under CC-BY-SA unless otherwise noted.