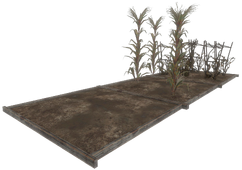 The garden plot, accessed through the resources/food menu in the workshop, is a type of world object that the Wasteland Workshop add-on permits the Sole Survivor to construct in most settlements using the workshop's resources/materials menu. Once placed, plants seem to function in the garden plots in exactly the same way as on natural dirt; there does not seem to be any improvements in yield, harvest rates, etc., and settler assignment and harvesting works exactly as with plants on natural dirt.

The garden plot may be used to supplement the food supplies of settlements with terrain that makes the amount of natural dirt inadequate or inconvenient for production.

There are a few potential settlements — e.g., the Boston Airport, Home Plate within Diamond City, and The Mechanist's lair (from the Automatron add-on) — in which all of the workshop's planting functions are deliberately disabled. In general, garden plots aren't a work around to support much larger settlement populations than the game designers intended for those particular settlements, but they may be useful in improving effectiveness of farming in many other settlements.

Each garden plot's outlines — which are visually modeled after partially buried landscaping timbers — provide a clear and obvious visual demarcation of its boundaries, even if multiple garden plots are placed as closely as possible side-by-side. (They do not snap together, or to any other world items, so each garden plot must be manually placed on its own.) Each is a square slightly smaller than a shack foundation floor, so each requires a fairly large area of unobstructed horizontal space for initial placement. Larger plants (like razorgrain) may require moderately patient rotating, jiggling and experimentation in order for all four plants to fit together in one garden plot. Nevertheless, even if the garden plots are placed closely side-by-side, and even if the above-ground foliage from their plants partially overlaps with others in the same or adjacent garden plots (as typically happens with closely-spaced mutfruit), it is still obvious at a glance which individual plants are in which garden plot. Garden plots can help the Sole Survivor organize and keep better visual track of how many plants, and where, and of what types, each settlement has at any given time. Likewise, as compared especially to plants placed on terrain with only limited and irregular spots of natural dirt, one may or may not be able to achieve a higher plant density per square-foot. But regardless, garden plots make it relatively easier to check for (typically exactly) four healthy plants in each garden plot: simply by sorting the plants into obvious groups of four, it's easier to spot at a glance, for example, which (if any) plants have been damaged by a raid. Likewise, when manually harvesting, the visual organization imposed by the plots' boundaries will permit faster and more thorough collection by the Sole Survivor. Although most other objects can block placement of a garden plot, one can place the garden plot over already-planted and existing plants without having to store or move them first, and once a garden plot has been planted, it can be picked up and moved together with its plants, which permits construction and reorganization/movement of the Sole Survivor's agricultural areas in a more efficient fashion.

Retrieved from "https://fallout.fandom.com/wiki/Garden_plot?oldid=2943213"
Community content is available under CC-BY-SA unless otherwise noted.