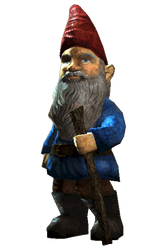 The garden gnome is a junk item in the Fallout 4 add-on Far Harbor.

Garden gnomes are used as set dressing, and much like teddy bears are often positioned in amusing or horrifying situations. There are three visual styles found on the island - red, blue and damaged. They have very little value beyond their use in crafting, decorating settlements or as ammo for the junk jet.

The garden gnome can be broken down into its individual components for use in crafting:

In the real world, garden gnomes are lawn ornaments, made from ceramic and painted bright colors.

Removing gnomes from the small island and the sailing ship close to Harbor Grand Hotel, and from the milk bottle toss at Echo Lake Lumber, and then placing them at the Longfellow's cabin settlement as decoration, may result in the gnomes disappearing and returning to their original places.

A gnome, one of three found near Eagle's Cove Tannery

One of three garden gnomes found at Fringe Cove docks

Garden gnome on Huntress Island
Add an image to this gallery
Retrieved from "https://fallout.fandom.com/wiki/Garden_gnome_(Far_Harbor)?oldid=3048770"
Community content is available under CC-BY-SA unless otherwise noted.