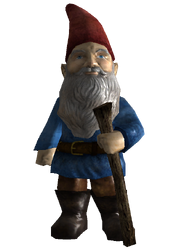 The garden gnome is one of three types of garden gnomes found in Fallout 3 and Fallout: New Vegas.

Garden gnomes come in four sizes: large, normal, medium and tiny. They are useful only as Rock-It Launcher ammunition or as a decoration. Normal-sized gnomes are by far the most common and stand about 20 inches tall. Medium versions of both intact and damaged gnomes exist, and only stand about 6 inches high. Gnomes can sometimes be found interacting with teddy bears, aligned in certain positions, playing certain roles.

Gnomes with signs in the Chryslus Building

Mini gnomes in the abandoned apartments 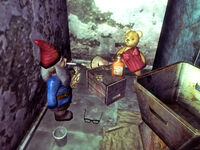 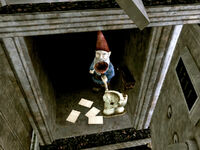 Gnome in the People's Bank of Point Lookout

Gnome in a wooden crate over the flooded sinkhole

Funny scene in the Presidential metro 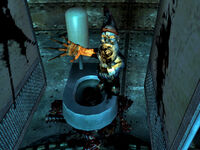 Gnome with a deathclaw hand 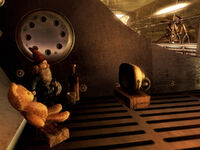 Bear and gnome in the robot assembly 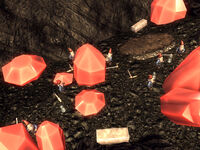 Group of gnomes in Old World Blues
Add an image to this gallery
Retrieved from "https://fallout.fandom.com/wiki/Garden_gnome_(Fallout_3)?oldid=3122725"
Community content is available under CC-BY-SA unless otherwise noted.