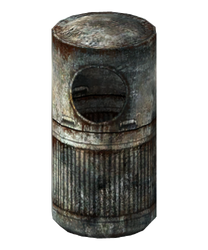 A garbage can is a pre-War object that is still used even after the great war in various stores (ex: Rivet City). They are basically trash cans and are used as containers to put junk in.

They mostly contain various junk items such as clipboards, bottles, and shot glasses. They often contain around up to nine caps, and can even rarely contain Nuka-Colas, cartons of cigarettes, and sometimes various ammunition types.

A more bent garbage can
Add a photo to this gallery
Retrieved from "https://fallout.fandom.com/wiki/Garbage_can?oldid=3189827"
Community content is available under CC-BY-SA unless otherwise noted.