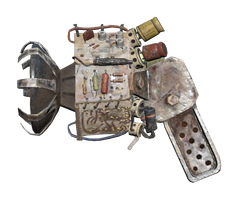 The gamma gun is a weapon in Fallout 76.

The gamma gun is a pistol that does ballistic, radiation, and sometimes energy damage (with mods), with a large orb projectile (much larger than normal hit detection box but does not do any type of area of effect). The projectile is highly visible with a similar effect to the Scorchbeast sonic wave attack.

It can be modified to increase its lethality. It has no effect on creatures immune to radiation, such as super mutants and ghouls.

Retrieved from "https://fallout.fandom.com/wiki/Gamma_gun_(Fallout_76)?oldid=3449462"
Community content is available under CC-BY-SA unless otherwise noted.